The South Island has seen hundreds of tremors, including a 6.3-magnitude quake, after the initial one struck after midnight on Monday.

The epicentre is northeast of Christchurch, near the town of Kaikoura which has been cut off by landslides.

A large river dammed up by a landslide also breached its banks, sending a "large wall of water" downstream.

Residents around the Clarence River - one of the largest on South Island - were being urged to move immediately to higher ground.

The aftershocks have left some communities without power and water, although authorities are slowly restoring supplies.

GeoNet, a government-funded project monitoring earthquakes, said the first earthquake was actually two related tremors, and that aftershocks would continue over the next few months.

Authorities have spent the night and day rescuing and evacuating residents along the east coast.

New Zealand media reported that a 100-year-old woman and her daughter-in-law were pulled out alive from their home in the town of Kaikoura, after the house collapsed in the first earthquake. The younger woman's husband died.

A woman also died at Mount Lyford, southwest of Kaikoura, though there are reports she may have died from an existing medical condition.

Waves of around 2m (6.6ft) hit the coast shortly after the first earthquake. Authorities have since lifted a tsunami alert, but are still warning people to stay away from the shoreline.

Residents in Christchurch and surrounding towns have rushed to stock up on basic supplies. Some schools in the affected area have remained closed on Monday.

Kaikoura, a popular tourist destination with a population of about 3,600, saw its main road blocked by landslides, with telecommunications, water and power supplies cut off.

The military and fire service have dispatched teams in helicopters and a navy ship to the town, and some people are being airlifted out.

Newshub shared a video of three cows left stranded on a tiny island after the surrounding earth collapsed from landslides near Kaikoura. 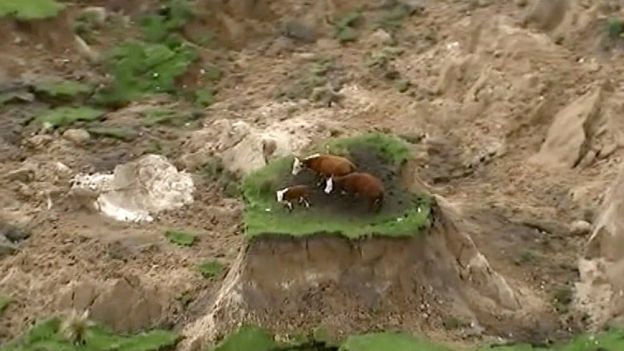 Prime Minister John Key told reporters that he believed the number of fatalities would remain low, while civil defence minister Gerry Brownlee said damage to infrastructure appeared to be the biggest problem.

One expert told TVNZ that the low number of fatalities may have been due to the fact that the first quake struck in the middle of the night.

"People were safe in their homes, homes might get damaged but they're safer for the people inside," said Ken Elwood from the University of Auckland.

The quake was also felt in Wellington on the North Island, where the city's central business district (CBD) remained quiet on Monday as workers cleared debris and checked buildings.

Resident Adam Roland told the BBC: "The CBD's been closed off so most people are either working from home or not working today."

GeoNet said the first quake was the strongest to have hit New Zealand since a 7.8-magnitude earthquake in 2009 in a remote area of the South Island.

Christchurch is still recovering from a 2011 earthquake that killed 185 people and destroyed the city centre.

A powerful 7.8-magnitude earthquake has jolted New Zealand's South Island and triggered a tsunami, sending people running into the streets in a panic.