Who are the people shaking up their fields most dramatically?

To answer that question, we sifted through hundreds of names in scores of categories to come up with a dozen disruptors who are less content to improve the status quo than to blow it up 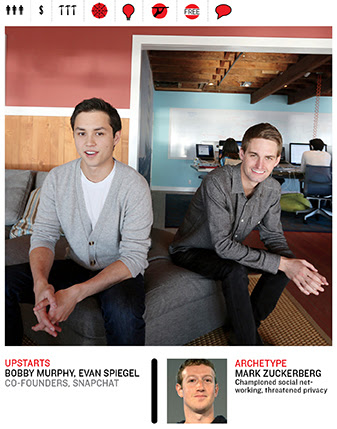 More than 350 million photos are uploaded just to Facebook each day. Terri?ed that all of those images will stick around forever? Snapchat to the rescue. It’s a smartphone app created by two former Stanford frat brothers that offers photo ?ashing: The opportunity to send a photo or video to someone and have it ‘self-destruct’ within seconds. By rendering digital photos ?eeting, Snapchat offers a face-saving alternative to our con- stantly tracked, unerasable lives on the internet—and a chance to reintroduce a modicum of privacy. Users are now sharing over 100 million snaps daily.

The revenueless Snapchat has attracted nearly $14 million in venture funding, as well as its own Winklevoss-style lawsuit. Spiegel, 22, insists the idea for the company came from a college friend who said, “I wish these photos I am sending this girl would disappear.” That friend, Frank Brown, is now suing Spiegel and Murphy, 24, alleging he was part of a previous similar company, Picaboo, that the three had launched. Brown claims he was unfairly cut out of business after an argument and that Spiegel and Murphy stole his idea. 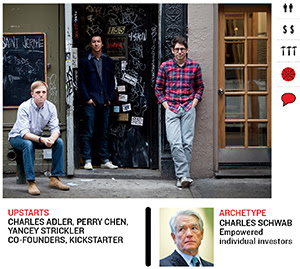 Last month, producer Rob Thomas turned to crowdfunding darling Kickstarter to raise money for a feature ?lm based on his cult WB show, Veronica Mars. Just 10 hours later, he hit his goal of $2 million— and notched a new record for the four-year-old platform (in speed, not dollars; the Pebble watch had raised $10.3 million). “It’s never been pos- sible to let fans directly in?uence whether something gets made,” says Kristen Bell, star of the series. “Kick- starter has changed that.” Having ?nanced thousands of projects from videogames to urban farms, CEO Chen, 36, says Kickstarter is the most powerful way for creative people to raise money—via the masses.

But Kickstarter takes only a 5 percent cut of every transaction and thereby misses out on the chance to score venture capital big or to enrich those who invest in the projects, who only get mind share or a product for their money.

Weiss imagines a future where kids scratch their heads at the idea of a cigarette. “Wait—you lit it on fire and put it in your mouth?” he jokes. The 39-year-old patent attorney, inventor and hedge fund manager runs NJOY, the category leader in the $300-million-a- year e-cigarette market—which is dwarfed by the $80 billion in annual US cigarette sales. NJOY looks like a cigarette, glows red when drawn and delivers nicotine in water vapour. “Our goal,” says Weiss, “is to obsolete cigarettes.” 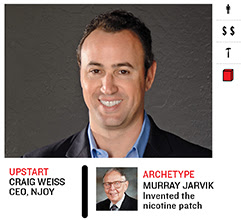 Illumina has reduced the cost of sequencing a human genome to $4,000 from $1 million in 2007. Kids with rare diseases are now receiving a diagnosis—and sometimes treatment—after years. Flatley’s sequencing has helped to spark the development of cancer drugs like Xalkori targeted to tumours with specific genetic mutations. Illumina’s technology can also identify conditions like Down Syndrome before kids are born, obviating the need for amniocentesis. Last year, Roche tried to buy Illumina for $6.2 billion. Flatley convinced investors they were better off sticking with him. 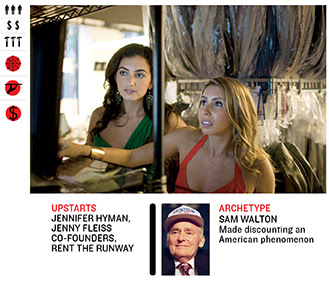 Rent the Runway has certainly redefined the fashion business, bringing high-end wear to Everywoman. It is also upending storefronts big and small—why buy a dress when you can borrow for a sweet price? “Our intention is to disrupt every single part of what retail has meant historically,” says Hyman, 32. Indeed, some department stores feel so threatened they’ve reportedly told vendors they will pull floor merchandise if it ever shows up on Rent the Runway’s site.

The inspiration for the startup sprang from a common problem. Women have long ‘borrowed’ special-occasion dresses from department stores, buying and then returning them after one night. Hyman and Fleiss, 29, figured that if they could provide warehouses full of low-cost rentals of the season’s latest designer styles—along with pampering customer service—they could beat out traditional retailers.

Today, the company is backed by $55.4 million in venture capital funding and employs 200 people, including one of the largest dry-cleaning operations in the nation. The website has 3 million-plus members, 35,000 dresses and 7,000 accessories by 170 designers. 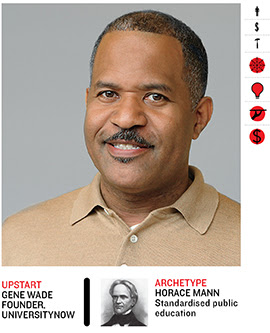 College grads owe a chest-seizing $900 billion on their tuition—a crippling burden for most. When wade, 43, founded UniversityNow in 2010, his mission was more than just making college more accessible to working adults by offering online, self-paced degrees; he also aimed to do it all without forcing students to take out loans. As he puts it, “The only thing worse than not having a college degree is falling short of finishing and defaulting on student loans.”

Two key characteristics of UniversityNow that distinguish it from a swelling crowd of rivals: Absurdly low fees (as little as $2,600, which includes tuition and books for as many courses students can complete in a year) and fully accredited degrees, from an associate’s to an MBA, which many online schools don’t offer.

Physician Lee often wondered, “How do you make a broken system more efficient?” This became the basis for One Medical Group, which offers a new model for primary care. The service provides some 90 physicians in metro areas. Its iPhone app lets you schedule same-day appointments, get test results, ask for an Rx and tap into your medical records for $150 to $200 a year on top of your insurance costs. Efficiencies allow doctors to spend more time with patients. Lee’s backed by $77 million in venture financing. 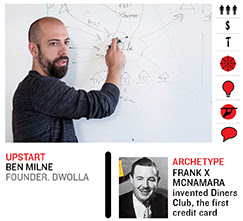 “I got pissed off ,” says Milne, shelling out 4 percent of sales in interchange fees for his fi rst business. He turned a vexation into a new business that would make sending money an easy proposition. Dwolla, an online and mobile payment system, lets users pay for bar tabs or dog walkers via email, text or social networks. Consumers love the service. Merchants pay 25 cents in fees for amounts over $10, instead of up to 1.9 percent of a transaction, plus a quarter, as Visa charges. 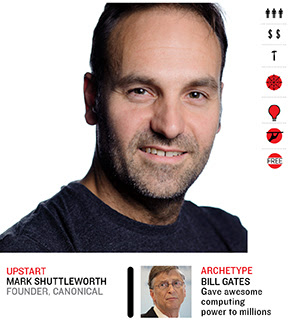 Canonical’s Ubuntu is an opensource Linux-based operating system that runs the same platform across multiple devices. Or, in plain English, its software can turn your tablet, laptop, smartphone or television into one connected system. That puts it in direct competition with Apple’s iOS and Google’s Android and with Microsoft (Shuttleworth, 39, estimates some 20 million folks use Ubuntu on their PCs). “There are deeply entrenched competitors that won’t be dislodged just by doing what they did and doing it faster or better just by 5 percent or 10 percent,” he says. “If there’s an opportunity, it’s to shake things up and attack the problem entirely differently.” Part of shaking things up means offering the basic platform for free and charging for enterprise and cloud services. This guy is one tough competitor. His idea of a relaxing vacation spot is Antarctica or the International Space Station. Yes, he’s been to both. He’ll need that moxie to muscle into the mobile market. 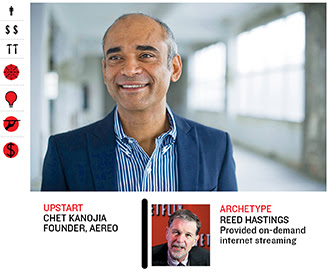 Two years ago, Kanojia visited the offices of the four broadcast television networks to tell them about his plan to upend their business. How? Aereo makes tiny antennas that pick up broadcasters’ channels for free. For $8 a month, you can rent access to an antenna that beams the live feed directly to your computer, iPad or iPhone—compared with $100 or more for cable TV. “The reaction was ‘We’ll see you in court’,” Kanojia, 43, recalls. Last year, all four broadcasters joined suit against Aereo, arguing it threatened them with “substantial irremediable losses”. The US District Court in New York sided with the upstart, but the networks have appealed. IAC CEO Barry Diller has joined Aereo’s board and helped lead a $38 million venture round in January. Aereo is using it to expand from New York to 22 cities; it’s also battling to license select programming. Kanojia has little sympathy for the rest of the TV industry. “What you have is a legacy business that’s predatory. We have a chance to recast the whole system from the ’70s on.” 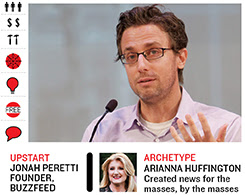 Last year, Buzzfeed started morphing from a social news site known for its silly lists into a real digital news enterprise. Established media took note as Peretti picked of some of their best talent and then started copying their viral genius, which Peretti played with at the MIT Media Lab and as a co-founder of The Huffington Post. The idea: Create content and ads that we can’t resist passing along to everyone.

Cleaner, greener fuels are no longer a fantasy. Jonathan Wolfson’s Solazyme is arguably the leader in turning algae to diesel on an industrial scale, even though it lost $85 million on sales of $44 million last year. It has fuelled jets and Navy destroyers and is now being tested in cars. Solazyme has also discovered other novel uses for algae. “Not only can we make renewable oils, but all of these oils can be produced out of one single fermentation plant in days,” says Wolfson, 42.

Poste-de-Flacq: The Success Story of Sandhya and Kishan Ramguthee
They never imagined meeting such a success. Yet in recent years, Sandhya and Kishan Ramguthee reached itself in the field of manufacturing and selling detergents. Their companyBest Detergents Limited , located in Poste de Flacq, continues to grow. And their products, marketed under the brand Kim et Shinex, innovate and diversify. They now plan to open another branch in another region.

MakeMyTrip's Tryst with Turbulence and its Journey Ahead
Deep Kalra, Indian online pioneer, has gained and lost his share of altitude. He keeps finding oxygen

Beyond the Food Truck: 10 Offbeat Mobile Businesses
It started with the food truck. Hey, you can get crepes on the street corner! Now, a growing number of service businesses have gotten on board, giving an entirely new meaning to the phrase “mobile commerce” with trucks or vans where you can do anything from get a DNA test to belt out a karaoke tune.

How, When and Why to Ask for a Raise
Next to firing an employee and having to inform a coworker of various personal hygiene offenses, asking for a raise is up there as one of the worst, most dreaded workplace conversations of all time.
Tags:
Businesssuccess story