South Korea Will Soon Be Home To An Invisible Skyscraper

innovationtechnology
Architectural firm GDS Architects has announced that it has received its permits to build the Tower Infinity near the Incheon Airport just outside of Seoul, South Korea. Although at 450 meters tall, it won’t be the tallest building in the world, it does have one unique feature: it will come equipped with a cloaking device.

The tower’s facade will come equipped with LED projectors and cameras. The cameras will capture the area around the building, then stitch them together in a panorama to display through the projectors. The result will make the tower seem transparent from the outside when the projectors are turned on.

On the company’s website, it explains that the tower will establish Korea’s rising position in the world not by building the tallest tower, but “establishing its most powerful presence through diminishing its presence.”

In addition to being able to appear almost invisible, the tower will also have plenty else for tourists to Korea to do. It will have the world’s third highest observation deck, as well as shops, restaurants, movie theaters, and apparently a water park.

“We look forward to providing Korea and the World with a completely new model for what it means to be an observation tower,” said Wee.

Below, you can see a concept image from GDS Architects as to how the LEDs will work to make the tower seem invisible. 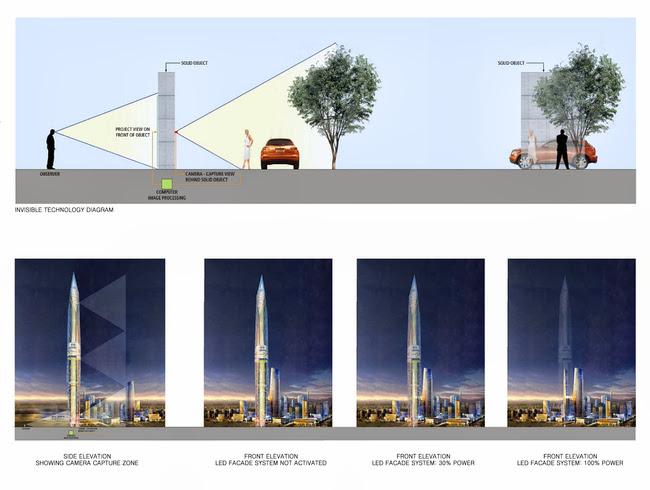 Just days after the Nasdaq broke 5,000 for the first time since 2000, billionaire entrepreneur Mark Cuban has thrown cold water on the most recent tech boom with a blog post arguing that this one is more fragile than the last.

Hewlett-Packard to Split Into Two Public Companies, Lay Off 5,000

Hewlett-Packard said it would split into two listed companies, separating its computer and printer businesses from its faster-growing corporate hardware and services operations, and eliminate another 5,000 jobs as part of its turnaround plan.

New ID Card : Conversion Process May Not Be Smooth

The world is changing. Technology is transforming our lives and relationships. As government moves further towards e-government and the computerisation of public services, it has envisaged to completely overhaul the existing identity card. However, the project has sparked some debates and even protests.

When 'Smart Homes' Get Hacked: I Haunted A Complete Stranger's House Via The Internet

“I can see all of the devices in your home and I think I can control them,” I said to Thomas Hatley, a complete stranger in Oregon who I had rudely awoken with an early phone call on a Thursday morning.

5 Must-Have Qualities Of The Modern Manager

As the world of work continues to change so do the qualities and characteristics of the managers who are going to be leading our companies.

Innovation and access to seed capital is making it easier than ever to start a technology company. Here's a look at how the tech industry is changing and how businesses can cope.