Apple’s iPhone 6 and iPhone 6 Plus made their big debut Tuesday, and they are the biggest and, according to the company line, most advanced smartphones in the company’s history. But how much better are they than the iPhone 5s and 5c?

To find out, we matched up Apple’s latest smartphones with their three predecessors in a multiround face-off. Here’s what we found. 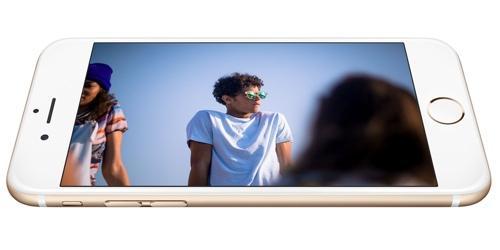 In addition to being larger, the iPhone 6 and 6 Plus screens also get a new kind of display technology called Retina HD, which Apple claims improves the two handsets’ screens, giving them better contrast and improved outdoor visibility, for example.

The iPhone 5s and 5c both use Apple’s original Retina display technology and offer screen resolutions of 1136 × 640.

Basically, if you’re looking for a larger screen for browsing the Web, playing games, or watching movies and TV shows, the iPhone 6 and iPhone 6 Plus are far better options than their predecessors’ comparatively diminutive displays. My colleague David Pogue agrees that the new iPhones definitely have crisper screens.

Apple has also updated the iPhone 6’s and iPhone 6 Plus’s designs, giving the phones a more rounded look that complements the rounded style of Apple’s new Apple Watch. The iPhone 5s offers a more angular design than its successors, though it features the same kind of build materials.

The iPhone 5c is the budget-friendly iPhone and as such gets a polycarbonate — plastic — design that’s bolstered by an internal steel frame. The 5c, though, is available in five different color options, while the 5s, 6, and 6 Plus get just three colors.

That the iPhone 6 and iPhone 6 Plus sport larger displays and are still some of the thinnest phones on the market is reason enough for them to win this round. But if you don’t feel like carrying around a big-screen handset, then the iPhone 5s or 5c is for you. Our best advice is to go the the store and play around with the bigger phones for a while. You’ll figure out pretty quickly if one of the bigger devices is for you.

Additionally, the iPhone 6 Plus gets optical image stabilization, which allows the camera’s lens to move within the phone in order to compensate for hand shaking when taking a photo.

The iPhone 5s and 5c come with older iSight cameras, which means they don’t include the new iSight cameras’ Focus Pixels technology and lack the iPhone 6 Plus’s optical image stabilization.

When it comes to the iPhone 5s and 5c, the 5s gets a better, True Tone flash, improved aperture, and larger 1.5-micron pixels. The iPhone 5c gets none of those but still offers Apple’s original 8-megapixel iSight camera. 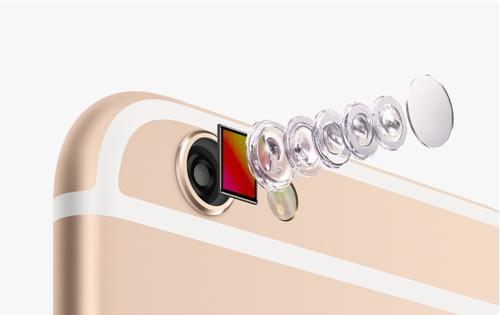 All of this is to say that the iPhone 6 and 6 Plus will likely be able to take better quality photos than the 5s and 5c. Still, the 5s’s and 5c’s iSight cameras are among the best on the market, so even if you stick with them, you won’t be getting a bad camera experience. If you want the very best, though, Apple has proved that it greatly improves its phones’ cameras every year. If the camera is the most important aspect of a smartphone for you, wait until the reviews are in to see what kind of leap we can expect from the two iPhone 6 models.

One of the biggest features of the iPhone 6 and 6 Plus is their new Apple Pay service. Using the phones’ built-in near-field communication (NFC) chips, Apple Pay lets owners make payments on items in brick-and-mortar stores by waving their iPhones in front of special NFC-compatible pads at compatible checkout counters. 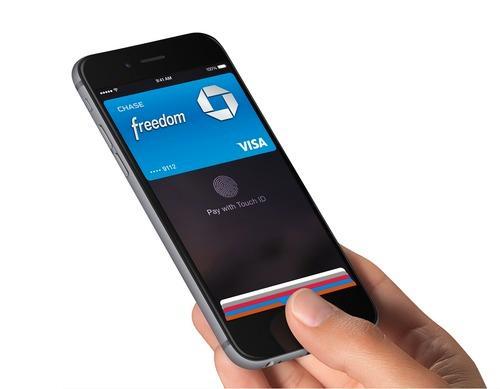 Since Apple Pay requires an NFC chip, something no other iPhones have had before, iPhone 5s and 5c owners will be unable to use the service. Whether tapping your phone is that much more convenient than pulling out your credit card is for you to decide.

The iPhone 6 and iPhone 6 Plus will come loaded with Apple’s new iOS 8 mobile operating system. The new OS includes features such as improved messaging and notifications, as well as Apple’s new HealthKit and HomeKit services. 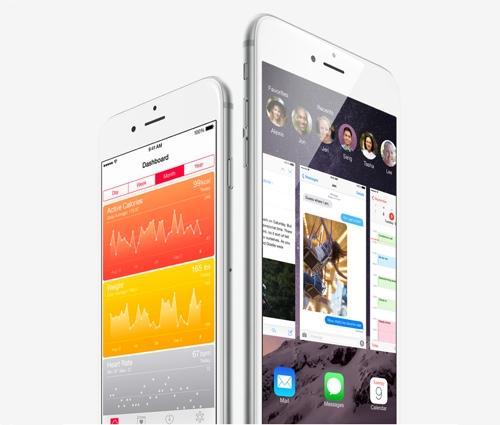 HealthKit acts as a central hub for all your health information, pulling in all the data from your disparate health and fitness apps and making them available in a single location. Likewise, HomeKit lets you control all your smart-home apps.

iOS 8 will be available for download for the iPhone 5s and 5c, so you’ll get all the same software features that iPhone 6 and 6 Plus users will enjoy. This one’s a push.

Apple has equipped the iPhone 6 and iPhone 6 Plus with the company’s new A8 chip, which Apple claims offers more processing power and better graphics for gaming than its last-generation A7 chip.

What’s more, Apple claims that the A8 chip is 50 percent more power efficient than the A7, which means better battery life. The A8 comes with Apple’s new M8 motion co-processor, which recognizes data from the 6 and 6 Plus’s gyroscopes, accelerometers, and compasses. That could be important if you use your iPhone as a fitness tracker.

The iPhone 5s comes packed with the aforementioned A7 processor, which was Apple’s first 64-bit processor. The A7 was largely heralded for its improved graphics performance, as well as the inclusion of Apple’s M7 co-processor.

Apple’s iPhone 5c runs on the company’s older A6 processor. It’s still a great chip and offers solid performance, but it lacks the power savings benefits of the A8 and A7 and doesn’t include a motion co-processor for tracking your steps.

Overall, if you want the best performance from your iPhone, the 6 and 6 Plus appear to be your best options. The 5s, however, is an excellent performer, and the 5c is a solid option.

It’s worth noting, though, that by buying an older smartphone like the iPhone 5c, you’re already behind the curve in terms of performance. That means the handset will become outdated faster than the 5s or 6 and 6 Plus. But if you’re not beholden to performance for games and the like, then the 5c is still a fine offering.

To power its bigger iPhone 6 and 6 Plus, Apple says it has increased its handsets’ battery life. According to the company, the new iPhones will be able to last all day without needing a charge. In fact, the company estimates that iPhone 6 Plus users will be able to surf the Web for up to 12 hours over WiFi or 4G LTE.

Apple says that the iPhone 6, on the other hand, will let you browse over WiFi for 11 hours and over 4G LTE for 10 hours. The iPhone 5s is rated to last 10 hours over 4G LTE and WiFi. 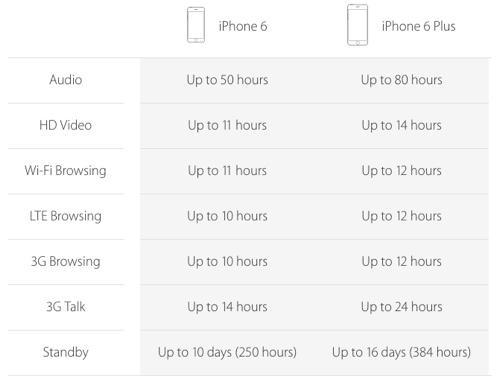 The iPhone 5s took a lot of heat for its lackluster battery life, and the fact that the iPhone 6 will get only an hour more juice than the 5s is a bit disappointing. Here’s hoping that the iPhone 6 Plus’s battery is as strong as Apple claims it is.

If you’re looking for an iPhone with a larger screen, improved camera, and enhanced battery life, it looks like the iPhone 6 is your best option. If you want a massive smartphone display and are set on sticking with Apple (and not, say, Samsung or LG), then the iPhone 6 Plus is clearly the option for you.

For folks who aren’t interested in a big-screen iPhone but want an impressive camera and performance capabilities, you’ll likely want to go with the iPhone 5s. And if you simply want to get in on the iPhone craze and Apple’s iOS ecosystem, but don’t want all the bells and whistles, the iPhone 5c will be perfect for you.

iPhone 6S Vs Galaxy S7: What's The Difference?
For millions of people around the world Apple or Samsung will be their toughest gadget decision of 2016. Yes, the (controversial) iPhone 7 is just two months away but many won’t wait.

Video shows possible new iPhone 7 without headphone jack
The rumors surrounding the next version of Apple's iPhone have, as usual, spanned a wide range of possibilities. Now, however, we may have something a bit more concrete.

'Space Black' could be the newest iPhone 7 color
The only bad iPhone 7 rumor is one that doesn't get us excited, which is why this latest one is a welcome tease at what might be coming next month: a truly black iPhone.

iPhone 7 Launch Will Smash Smartphone Competition
Android manufacturers are gathering in Berlin for the annual IFA Trade Fair, ready to show the world the next evolution of smartphone technology.
Tags:
appleiphonesmartphones