India on Alert After Sunderbans Oil Spill in Bangladesh

Environmental authorities in India are on alert after thousands of litres of oil spilled into a nature reserve in neighbouring Bangladesh.

Villagers have been asked to help the government clear the spill

Oil leaked into waterways in the Sundarbans area after a collision involving a tanker three days ago.

The oil spilled after a tanker carrying 350,000 litres (77,000 gallons) collided with another vessel, spreading a sheen across 60km of waterways.

The Sunderbans is a Unesco heritage site, home to many rare species.

The oil leaked into the river at a sanctuary for rare dolphins. 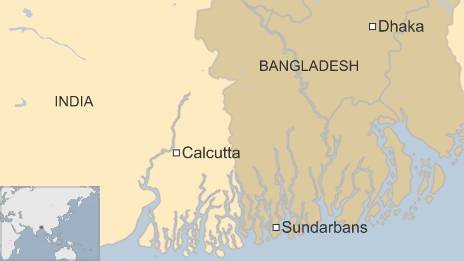 Environmentalists have expressed concern that the impact on wildlife could be disastrous.

But government officials say they still cannot give an assessment of the likely damage.

The UN on Thursday called for a complete ban on all commercial vessels using the waterways of the Sunderbans.

The Bangladeshi navy initially sent four ships to deal with the spill, and planned to use chemicals to disperse the oil.

But it was unclear whether the chemicals could be used, amid fears they could cause further damage.

"This catastrophe is unprecedented in the Sundarbans and we don't know how to tackle this," Amir Hosain, chief forest official of the Sundarbans, told AFP news agency.

"We're worried about its long-term impact, because it happened in a fragile and sensitive mangrove ecosystem."

The tanker was reportedly on its way to deliver the oil to a power plant in Gopalganj when it was struck by another vessel.

The Sunderbans, a Unesco world heritage site, is a vast river delta on the northern shore of the Bay of Bengal.

Its mangroves and rivers are home to a vast array of plant and animal life, much of it unique to the region.

The government declared areas in the southern Sunderbans to be a dolphin sanctuary in 2011, after research suggested some 6,000 Irrawaddy dolphins lived in the area.

Text by BBC
We also reccomend
Bangladesh: low labor costs attracts textile manufactures
Many Indian garment makers have shifted base or opened new units in neighbouring Bangladesh to take advantage of low labour cost and duty concessions on exports to US and European markets.

Narendra Modi just banned Rs500 and Rs1000 notes to fight corruption and terrorism
India has decided to end the use of Rs500 and Rs1,000 currency notes from Nov. 09. During a televised address late yesterday (Nov. 08), prime minister Narendra Modi said that the drastic measure was taken to curb the flow of black money and prevent the counterfeiting of notes in Asia’s third-largest economy.

Passengers can enjoy a gourmet platter on this luxury train in India
The country that boasts of Asia's largest rail network and possibly the world's highest passenger traffic, will soon roll out a premier train service between Mumbai and Goa — popular destinations on the west coast.

McDonald's to shut 169 outlets in India amid dispute with local partner
Fast food chain McDonald's said on Monday it planned to shut all 169 of its restaurants in India's northern and eastern regions, escalating a dispute with its local partner and potentially putting thousands of workers out of jobs.
Tags:
Bangladeshindiaoil spill